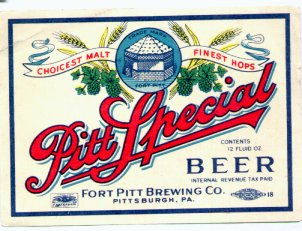 It's more about how you say something, than what you actually say....

"Why would Jerry bring anything?" Did he emphasize Jerry or bring? (Seinfeld fans will remember this one).

This is the dilemma I faced this week when I sent @Duquesnebeer a message on twitter about some "here say" that has been circulating about the possibility of rekindling the flame of Fort Pitt Special Beer. Allegedly there has been some talk about starting the brand back up again. Fort Pitt Special was a beer brewed in Sharpsburg, PA from 1906-1920. Once prohibition started in the US they ceased operation until 1933. Beer operations began again after 1933 until 1957 under Fort Pitt Brewing Company. Fort Pitt Special Beer was one of the top selling beers in the 1950's in the Pittsburgh area. From the research I've done, it came in various styles under the 'Fort Pitt" brand name. I've seen everything from Fort Pitt Special, Fort Pitt Beer, Fort Pitt Lager, Fort Pitt Pilsner, Fort Pitt Ale, Fort Pitt Porter, and even Fort Pitt Pale Ale.

This wouldn't be the first time that Fort Pitt Special Beer has attempted a comeback. Jones Brewing Company, famous for brewing Stoney's, tried to bring back the Fort Pitt legend in 1989 by claiming to brew with the original formula and starting an extensive marketing campaign. To make a long story short, it didn't work, and Jones Brewing Company closed up shop in 2001. Stoney's is still brewed today at City Brewing in Latrobe, PA.

City Brewing.....huh........the same place Mark Dudash is brewing Duquesne Beer. I've heard from a few sources, AKA people who drink beer that talk to people who sell beer, that Fort Pitt will be making a comeback AGAINNN......allegedly under the same umbrella as Duquesne Beer. Mark said to the Trib on March 7th, "we never expected the consumer response to be so great and lead to such record growth,"  as he talked about the sales of Duquesne Pilsner and there availability in cans. That quote is exactly this why I believe he will try to bring back Fort Pitt.


The beautiful thing about Pittsburgh is we love old things. We love things that aren't there anymore, and old school thoughts and ideas. Mark took a shoot with Duquesne beer, and we didn't let him down. We love it!
It's an old school beer, brewed in Latrobe with great nostalgia. If it worked once, why wouldn't it work again with another brand? Why stop at Duquesne Beer, when you can tap into that old school mentality and bring back Fort Pitt.


So do I believe that Fort Pitt will be out in 2011??? Well I'll let you decide that one.
Below is the what I asked Duquesne Beer and their response.


Me - @DuquesneBeer - I know the cans are in the works, but is there a new brand in the works? Fort Pitt?


Prince of Pilsner - @Leber412 - ....The Price, like Washington cannot tell a lie. All I can say is you may be pleasantly surprised! 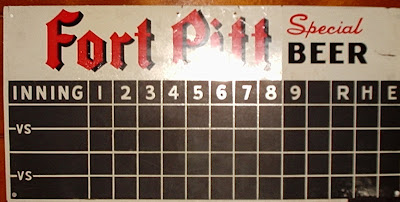