The Birth of the Brick Alley IPA 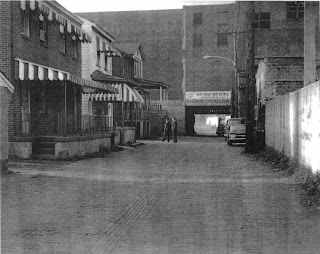 It's an old area... with old people, old ideas, and old stories. It's an infamous place, where most people live pay check to pay check and always talk about how it used to be. It's a rough area, and when mentioned any where in the North Hills of Pittsburgh people tend to cringe. It's a place that I call home; the place I grew up, and the place that inspired what I will soon create. Most people know it as the Mon Valley. There's a saying that has echoed through the generations of certain people in the Mon Valley...it kind of went..."If you ain't Mon Valley, you ain't Sh*t." Again I some how find a way to digress from the main story, but it's all part of the ride. A bumpy ride indeed.

Tucked away nicely in the Mon Valley is a place "Where the sun always shines, and the mud never dries." I didn't make that saying myself, but it's a great way the old folk describe Port Vue. It's a small town that lies above the city of McKeesport. The town is full of older people that lived the "American Dream" of working in the mills and providing for their families. A small boro of overall great people all trying to live average lives doing average things. Inside of that boro are a few young people that are motivated to step outside of that common dream and create something special. I happen to be one of those individuals.

It's funny for me to say this, but back in the day their used to be a place....a place that most knew of, but few ever went. My grandfather used to tell me about it all the time, but he never really got into detail of what it was. The place was called "Brick Alley". You're probably thinking, "Wow, what a build up for Brick Alley, who cares." Well, Brick Alley was more than your average trashy alley in McKeesport. It was internationally known as one of the most infamous red light districts in the country. In the 50's and 60's, Brick Alley was booming! From what I hear, Brick Alley was run by corrupt political figures and the place only got "raided" to keep the common citizens happy.  Most of the "johns" were white males, and mostly all of the women were African American. This place was kick back city, and to be honest, an establishment that this country was founded on. Sad, yet true.
Anywayyyy....that's besides the point. Brick Alley is a nostalgic place that most people still talk about today. It was a rough place with hints of happiness, shame, bitterness and sweet pleasure. It quenched your metaphorical "thirst" until the next time you could get there. It was best enjoyed on a hot summer day, and it was everything the Brick Alley IPA will represent.
The Brick Alley IPA will be the first in a series of summer beers that will be brewed by a few men with a big dream.
Memorial Day is right around the corner, and so is the Brick Alley IPA!
Next Post:
Did Someone mention Rosenberry????
Posted by Lebes at Monday, May 02, 2011