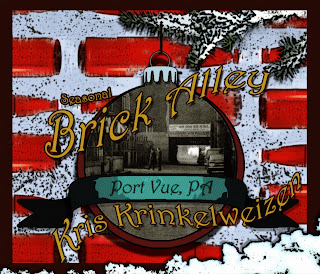 The Kris Krinkelweizen, the winter seasonal dunkelweizen that should of never been a winter dunkelweizen.

Of course there's story behind this beer, as is most of the things we do when it comes to beer/brewing. Let's start with the basics.....


A dunkelweizen is an interesting beer to begin with, combining a dunkel or dark wheat with a traditional Weissbier or hefeweizen. Basically, a dunkel has sex with a hefeweizen, and they create this super interesting kid with white hair and dark skin.
My first experience with a dunkelweizen was this past August in the small German town of Jasper, IN. There's a great German restaurant there called Schnitzelbank, which serves up some great traditional German food along with great German beer. If you're ever there, check it a'ht.
Side note -  I was there for work, working on a project at the local turkey farm. We won't get into the turkey farm because it will most likely have you cooking ham instead of turkey next week because of the gruesome details.
Ever since then, I thought it would be cool to try to brew a dunkelweizen. From what I saw online, it most likely had to be an all grain brew, which we've never attempted. So I basically forgot about it, until my last visit to get bottles at the Porterhouse Brew Shop. Ruth usually keeps all there kits on the shelves and I was browsing while I was waiting in line. THERE it was, a dunkelweizen kit sitting on the shelf. I've never seen this kit in the past and asked if it was rare. Ruth said her husband brews it, but they usually don't sell it often. It's an all grain kit and a little harder to brew. I didn't care, I scooped it up and thought we'd figure it out later. I asked, "What do you need for the all grain kit?". "Just an extra pot, I think", she said. I was sold.....until later I figured out that you need more than an extra pot.
You need more time, water, energy, and a mash tun...and by the way, you have to build your own mash tun. If it wasn't for the insomniac wisdom of Bedont, we would of never even began to brew this beer. He basically took the mash tun by the balls and made his own with a 10 gallon jug, some pixie sticks, a few washers, a bolt, 1 can of chew, and perseverance. After that he passed out on the couch after not sleeping for 30 hours.
After all that, we actually began to brew the beer, which was originally supposed to be a Pumpkin Dunkelweizen (Pumkelweizen) without actually using pumpkin in the beer. We were going to add all the necessary pumpkin spices in the beer during secondary fermentation. Well, we actually did do that, but in the end it didn't taste like pumpkin at all, not even close. We even had Eric Boyd create another great label for the Pumpkelweizen before we even tasted it. Don't worry, we'll try again next year. Check it out below...this guys is good! 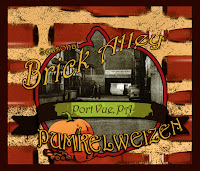 Long story short, It tasted like a dunkelweizen with winter spices. We added cinnamon sticks, nutmeg, all spice, cloves, and chucks of whole ginger root to the secondary. All fresh spices of course, not that cheap ground up shit you get at the store for 99 cents. What came out was a dunkelweizen with great winter spice aroma and taste. Was it meant to be....Who the hell knows, we're hoping it tastes pretty good when it's done naturally carbonating. I cracked one open yesterday, not fully carbonated yet, but it was truly unique.
In the spirit of the season, and because he was pretty hammered, Hays started "brainstorming" ideas for the name of the beer. Sure we wanted to incorporate Christmas and the holidays, but everyone already used Elf, Santa, St. Nick, and the term "winter". Those names were pretty played out....
The jolly man that he is, he said, "Why don't we use Kris Kringel in the name?" And so it became.....the Kris Krinkelweizen (dropped the "g" for a "k" to go with the dunkel vibe). Of course, the label you see above was designed for Eric Boyd. Only he can give the Brick Alley scene a feeling of holiday cheer. Of course, back in the day, I guess you could go there for some holiday "cheer".
Have a great Thanksgiving!
Cheers!!!!
Posted by Lebes at Thursday, November 17, 2011