Taking out the TRASH

A few days ago I saw some info on the TRASH brewing competition that is held every year here in Pittsburgh. For those of you that don't know, T.R.A.S.H. stands for Three Rivers Alliance of Serious Homebrewers. It's a competition that's held every year where homebrewers can submit their beer, cider, or mead for a chance to have their beer brewed on a commercial scale. There's a few special awards that are presented each year from East End Brewing, Rock Bottom, and the TRASH organization.

The guys who started TRASH were drinking craft beers in Turtle Creek before I was drinking Pedialyte so this organization has been around for a long time.

Last year, we attended the tapping of Tartanic Scottish Ale and Saison Shine down at Rock Bottom in Homestead. Both were winners of the East End Award and Rock Bottom award respectively.
The East End Award will go to the best session beer below 4.5% ABV. Not gonna lie, we won't qualify for this award. Our beers generally range about 6%-8% ABV. Oh, by the way, ABV stands for alcohol by volume. The lucky brewer to win this award will have their beer brewed by East End Brewing. EEB will put the beer on a few taps around town and it will be available at their growler hours.
The Rock Bottom award will go to one of the winning beers that can be fermented with a Rock Bottom strain of yeast. So if you are brewing a beer that can be fermented with a Scottish ale Strain, a Kolsch strain, or a wit strain, then you're qualified to win this award. We'll be brewing a specialty beer that will fall into this category.
The Turtle Creek Award will go to the homebrewer who's beer accumulates the highest number of points. This award will be presented by the TRASH organization.
We'll be entering  three, I mean 2 beers into the competition this year, one old school extract beer, and an all grain specialty that will qualify for the Rock Bottom Award.
We lost our third potential entry in a catastrophic carboy accident a few weeks ago.
R.I.P. 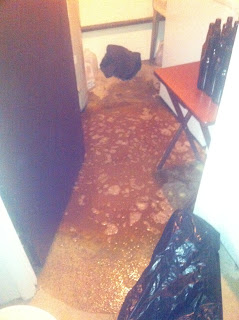