Even though we're home brewing, we've been churning out a new beer every 2 weeks with the same equipment we've originally purchased from the Porterhouse Brew Shop. As  home brewers, this is great, but we've been a little lax on naming our beers. Over the last few weeks we've got some good names rolling. Hope everyone enjoys them. We usually stick to brewing the beers and naming them. After that we let people with the art experience take over from there.

BIG THANKS TO SARAH KANE (@danitySKANE) FOR DESIGNING THE LABELS BELOW!!! SHE TRUELY MADE OUR "IDEAS" COME TO LIFE. JOSH, ERIC, AND I TRUELY APPRECIATE ALL OF YOUR GREAT WORK!

Great play on words with this beer. Everyone has been guilty of a little crop dusting from time to time in public AKA (silently breaking wind on unknowing bystanders as you walk past). Personally, I am a repeat offender of this in Dollar Tree and Walmart on a weekly basis. This beer is a darker shade of cloudy amber brewed with 5 different types of American hops. We also entered this beer into the Trash 22
competition.

If you know my group of friends, then you know there's one thing we love to do in the summer, and that's porch sit. Porch sitting is a great American tradition that can be done alone, but it's highly recommended to do with great friends and great beer. This recipe went a few different ways at first and in the end came out like nothing we've ever done before. It's really hard to categorize this beer because of it's Belgian malt base, wit yeast, American hops, and apricots in the secondary fermentation. Ultimately we categorized it as a Belgian Pale Ale? Whatever it is, it's sure to be truly unique. Since we've never brewed this recipe or tasted it, we were a little unsure about entering it into the Trash 22 competition. In the end, we figured, ahhh screw it, let's do it. This beer will be ready to roll this weekend after a few weeks of carbonation.

Just like something that would crawl out of the Mon, this Black IPA is very dark, malty, and super hoppy. We wanted to explore this unique beer style and put a little spin on it. We hopped this beer every 10 minutes with 3 different kinds of American hops for 60 minutes. This beer will appeal to both hop heads and people looking for a dark, roasted malty base. We didn't get this beer made in time for the beer competition, but it should be ready to go in about a month. 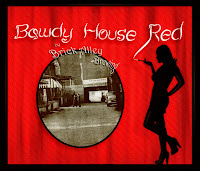 You might be asking yourself, "What does it mean?" Well, nobody really knows what it means, but it gets the people going. Had to do it, sorry. A Bawdy House is an old school word for a brothel or house of prostitution. So....why would you name a beer after that. Two reasons: the beer is an amber ale (reddish in color), which is a play on the "red light district". The second reason is the name sticks with the Brick Alley theme of McKeesport. We decided to honor the old red light district with a beer named after the brothels that once lined the alley. If you look up old newspaper articles on McKeesport in the 1940's, they talk about the raids and corruption of the old "bawdy houses" on Brick Alley. Nothing better than a little bit of prostitution history while enjoying a great beer. This beer follows the basic malt and color blueprint for an American Amber Ale, but is hopped up for great bitter finish. This beer will be ready to be bottled and enjoyed in about a week.