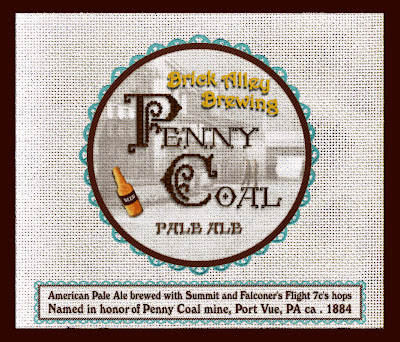 We dug back very deep into Port Vue history to come up with the name of our American Pale Ale. Port Vue, named after it great view of McKeesport, PA, is a small borough commonly known as the town where the sun always shines and the mud never dries. I'm sure not many people know much about Port Vue or any of its rich history, so this is why we felt the need to bring a small slice of it to light. Penny Coal Mine was a small mining operation that was in existence from 1884 to just after the turn of the century. They mined the coal in Port Vue and railed it to the Youghiogheny River to be put on barges and sent on its way. Below is a picture of the Yough and the Penny Coal Rail Road on the other side of the river.

Time can mask a lot of history that built this area and what it stood for. Not only is it a kick ass name for a Pale Ale, but it brings some of Port Vue's history to the forefront.

The label was created by Eric Boyd to highlight the look and feel of the time period. Look closely at the background of the label to see the signature image of Brick Alley.

As always, the beer is generously hopped and brewed with American Pale Malt and flaked wheat.
Summit hops are dwarf hops grown on short trellises in the Yakima Valley that create a very citrusy aroma and taste. Falconer's Flight 7 C's hops are a unique blend of Cascade, Centennial, Chinook, Citra, Cluster, Columbus and Crystal along with additional experimental varieties that highlight citrusy/earthy overtones in the beer. Hop Union LLC created this blend of hops to honor the late Glen Hay Falconer. The first batch came out great, so I fully expect us to brew this one again!