Just wanted to shoot out a quick update on some great label art created by Eric Boyd and Chelsea Leber. We needed to get some art together for our last few beers before this weekend, and they did not disappoint.

This weekend will be Brick Alley Brewing's first advertising of 2012. We will be sponsoring Miss Greater Juniata Valley, Amanda Pope, during the 2012 Miss Pennsylvania Scholarship Pageant.

We will also be donating some craft beer essentials as well as a 6 pack of our craft beer. The items will be raffled for charity.

Just for all of you keeping score, we've successfully locked down 9 recipes in less than 1 year.

Also, we'd like to get your input again. Take a quick second and vote on all of the label art for the beers that will be raffled off next week.  The earlier labels are a few posts back, so check out those labels that were created by Sarah Kane.

Labels and Beer descriptions below!

Thanks to Eric Boyd, Chelsea Leber, and Sarah Kane for designing the label art for the beers that will be donated for the charity raffle. 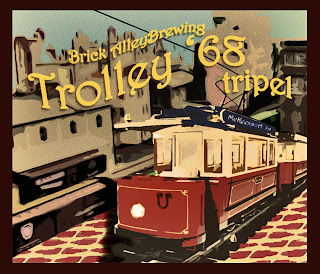 After a few hoppy recipes, we wanted to tap into some old school styles and design a unique Belgian Tripel.  This tripel is brewed with 4 different malts, belgian candi, and lightly hopped with Saaz, Hallertauer, and Fuggles hops. So where does the name come from? 68 was the number of the Trolley that used to run from McKeesport to Pittsburgh back in the early 1940's and 50's. We wanted to honor the history of the old street car era with a classic belgian tripel style. Another reason for the street car/trolley theme came from Josh. He's been on the trolley bandwagon for the last few brews so I feel like the name and the beer were made for each other. 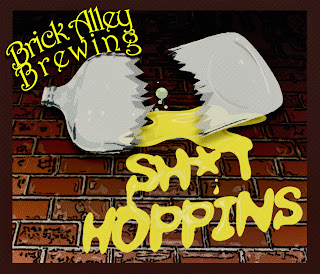 As the famous saying goes,"Shit Happens." That's pretty much all you can say after someone drops a 6 gallon carboy full of beer. We'll never know what that first batch of the Belgian IPA would of tasted like, but judging by the 2nd, it would of been a great beer. The name of this beer doesn't have a unique historical significance, but it does follow in the foot steps of our other satirical names we've used for IPA's.  This Belgian IPA is a darker deep amber that is hopped with Warrior, Columbus, Simcoe, Cascade, and Challenger hops. Just for good measure we dry hopped this beer with Citra for about 14 days. So in the end, the Shit part of the name covers the drop (RIP), and the Hoppins covers the 6 varieties used to hop this beer. 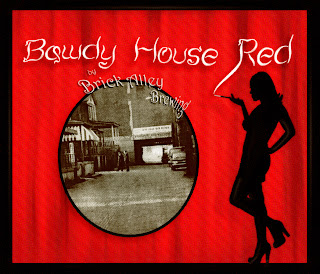 You might be asking yourself, "What does it mean?" Well, nobody really knows what it means, but it gets the people going. Had to do it, sorry. A Bawdy House is an old school word for a brothel or house of prostitution. So....why would you name a beer after that. Two reasons: the beer is an amber ale (reddish in color), which is a play on the "red light district". The second reason is the name sticks with the Brick Alley theme of McKeesport. We decided to honor the old red light district with a beer named after the brothels that once lined the alley. If you look up old newspaper articles on McKeesport in the 1940's, they talk about the raids and corruption of the old "bawdy houses" on Brick Alley. Nothing better than a little bit of prostitution history while enjoying a great beer. This beer follows the basic malt and color blueprint for an American Amber Ale, but is hopped up for great bitter finish. This beer will be ready to be bottled and enjoyed in about a week.
Posted by Lebes at Thursday, May 17, 2012