Craft Beer in the Burgh'

If you like craft beer/microbreweries and you're from Pittsburgh, there's a really good chance you've been or drank at the following establishments: 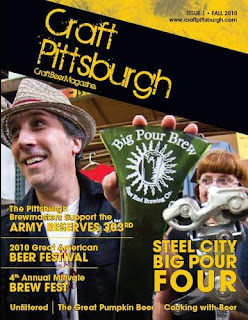 You might be at the point where you are thinking, "I've been there and done that." What else can you drink that's local, craft, and delicious? I set out on that journey, only to find the Craft Pittsburgh magazine. A full color publication dedicated to the craft beer scene in Pittsburgh. What a find!!!! They even have a website that provides local craft beer tastings, events, home brew recipes and great info on local craft beers. Have you ever heard of East End Brewing or Voodoo Brewing? I hadn't, but I wanted to find out more. Just because these places don't serve food doesn't mean they don't provide quality beer. Where do I buy this beer, how can I try it, and what does it taste like? How great would it be to go to a brew event in Pittsburgh where you could sample great home brews and local breweries craft beers? I mean I never knew there were such things as the Millvale Brew Fest, the Pittsburgh Big Pour Event, and the Pittsburgh Brewmasters tasting event. There's a 3 Rivers Beer club??? Where do I sign up? There are 40, events just in February listed on the Craft Pittsburgh site for beer tastings, meetings, and craft beer events in Pittsburgh. For all the math people out there, that's 1.428 beer events per day, since 2011 is not a leap year. How bored are you in the middle of winter in Pittsburgh when it's 11 degrees outside? You don't ski, the gym is always packed, so what do you do? I mean you can play Call of Duty, NCAA or Madden but eventually you win 10 straight Super Bowls, take SMU to elite status, and prestige 10 times. While doing all those things you never leave your house, you start to go crazy, and most likely your eyes burn from staring at the TV for 5 straight hours a night. I figure, get a friggin' hobby, meet some people, drink some beer, talk about ideas and recipes. Everyone already loves to drink good beer so why not do it as a hobby with other people who like to do the same thing. Check out this site, follow them on twitter, and check out an event.

www.craftpittsburgh.com - It's a great read. You can also download the magazine for free.

Rando Thought: I'd actually like to hold a local brew fest for charity some day. Invite tons of local breweries and home brewers. Give out awards, sell merchandise, and make some money for a great cause. What cause? Not sure yet. I once drank to raise money for cancer. I drank a lot, way too much, but it was for a good cause.


So in the meantime before the next post on the book, I figured I'd throw out some good info.
Posted by Lebes at Thursday, February 10, 2011