A lot has happened since the last post. Much of that involving copious amounts of beer, celebrating, tears, happiness and disappointment. Let's take a quick minute and think about drinking. Drinking beer is really not that fun unless you're with great people enjoying great beer. No one likes to sit there and drink beer by themselves listening to Sugarhill Gang. People do it, but it's really not that fun. You can't play photo hunt by yourself at the bar. You can't enjoy sports with a beer by yourself because there's no one to high five when the Steelers score a TD or the Pens score a goal. Let's face it, when you drink it should be done with more than yourself. Same with brewing beer. It's best done with multiple people. Can't wait to get back with the old crew and talk about brewing beer together. 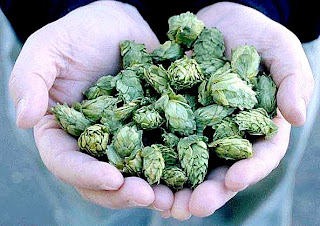 As I promised last time, this post will be about the wide, wonderful world of hops. Let's hop in (pun intended).

Let's start off easy. What are hops and what do they do?

Hops are the main bittering agent in beer as well as a natural preservative. There are 2 main varieties of hops, bittering and aroma.

Now that you know there are 2 main types of hops in brewing and the basic time they are added to the boil let's move onto hopping processes and types of hops.

Bittering Hops
Flavoring Hops
Finishing Hops
Next I'll talk a little bit about dry hopping. Dry hopping is not the safer alternative to sex, but it is a different way to add hops to your beer.