Who Drinks Beer from a Wine Glass

While exploring the wonderful world of beer, I've discovered something so elementary, so easy, I can't even believe I initially missed it. Something so simple, yet so important to what you are trying to accomplish while drinking beer. Well, let's take a step back real quick and make this a little easier to understand. If I'm playing baseball on a warm summer day and I step to the plate to take an at bat, what am I holding???........ I'm holding a bat right....usually made of wood, aluminium, or some combination of space metal filled with air that will most likely propel the baseball at 1,000 MPH off of some poor kid's forehead. That's not the point, nor the time, but I'm holding a bat none the less. If I'm teeing off at a golf course with a few friends, what am I holding???....I'm holding a golf club (probably a shitty one) but it's a golf club. And if I'm sitting around enjoying a great craft beer, what am I holding???.... I'm holding some type of beer glass. Beer glasses are the bats and clubs of drinking. You cannot drink a certain style of beer the right way unless you are drinking it from the proper glass for that style of beer. Believe it or not, your lucky beer mug is not the right glass to use for every type of beer you consume. WHY???? Well one might think, "I don't care what my beer is in, as long as it gets me drunk." Well, well my friend, then this blog is not for you. This is dedicated to people who enjoy the ingredients, flavors, and brewing techniques behind the great beers we drink. Of course everyone has a premeditated slaughter house weekend planned from time to time, when you are going to do just that. You plan well in advance a complete annihilation of your liver, mostly because of a special event, birthday or bachelor/baccalaureate party. Then your lucky beer mug plays 99.97% of the time. Back to the point. How many times have you been at a microbrewery and you order a beer from the list that you've never had before? If you're like me, this happens all the time. When I get my beer sometimes it's in a mug, a pilsner glass, or in a wine glass??? I think to myself, "Wow, wonder why it's in a wine glass?" Usually I'd assume because the beer is some kind fancy pants beer that deserves a classy wine glass. Or the beer has a high alcohol content, so it's best if I drink a wine glass full instead of a pint glass full. Well those rookie assumptions are completely and utterly wrong. Certain beers are served in certain glasses to compliment how they were made. What happens every time your pour a beer into a glass? It foams, some more than others, but it foams. As Al Snow once put it "What does everybody WANT........HEAD!!!" Al should of said "What does everybody WANT......GOOD HEAD." When you pour a beer into a glass the foam (or head) that forms is considered to be a net to release aromas, flavors, and volatiles from the beer. Volatiles are compounds that the beer releases AKA aromas, spices, certain additions and flavors. If your beer creates the proper head and proper retention, then you actually can taste all of the flavors of the beer. If it doesn't, then they don't get released and stay trapped in the beer. So if I'm enjoying an American Ale I should actually use a flute glass instead of my pilsner glass. Huh, I've never even thought about it until today. I'm sure some people are thinking, "Shit, no wonder that Imperial Stout beer I had didn't really taste as good as I thought." Well not only did you have it in the wrong glass, but you probably didn't have it at the right temperature either. Believe it or not, but not all beer should be "tap the rockies" cold. Certain beers should be served ice cold, cold, cool, room temperature, and warm. I'll give a link in this post of types of beers and temperatures as well. Better go get those IPA's out of the fridge. Go, right now, because they are supposed to be kept between 54-57 degrees F. 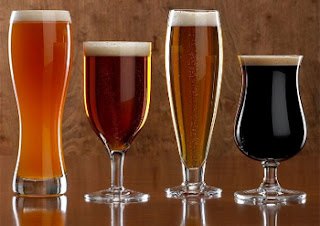 Below are 2 very important links that you should check out ASAP. The first link is on glassware for your beer and the second link is a serving temperature guide for beer.